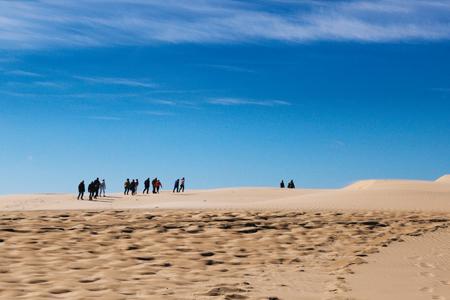 Råbjerg Mile is a quite unique natural phenomenon, and one that is in fact hard to pinpoint. The ‘Mile’ is Denmark’s largest migrating dune; even planting has not arrested its travels. Here, you feel as if stranded in a desert. It’s hard to understand that such wonderful nature exists right in the middle of North Jutland. The mile covers an area of roughly two square kilometres and can reach an altitude of 35 metres above sea level. Råbjerg Mile is a piece of Denmark’s history and, at only three kilometres from the camp site, it’s not to be missed. From the headland you can see what is perhaps North Jutland’s loveliest view. On a cloudless, warm summer evening the sunset is incomparable. Bring a camera – there is many a sight you will want to remember!

It’s hard to believe that some plants survive the harsh conditions on Råbjerg Mile, but the mountain pine does just that. As a bush it can be found in many mountainous regions in Central Europe. It was brought to Bunken to create the dune plantation at the end of the 18th century. If you visit Bunken Dune Plantation, imagine the area as it was just 100 years ago: a barren site. People planted the mountain pine to arrest the movement of the sand that plagued both man and beast in this area.

Bonfires and barbecues on Råbjerg Mile

Anyone thinking of cooking over a fire or barbecue outside the camp site itself can be reassured. There are two places in Bunken Dune Plantation where cooking on an open fire is allowed. One is in the middle of the plantation at a rest stop north of Lillesø, and the other is at the southernmost end close to Råbjergvej.

See Råbjerg Mile by bike or on horseback

In Nordvendsyssel is a bridleway that criss-crosses the plantation and its very special natural environment. The entire route is 200 kilometres in length, extending from Hjørring, Hirtshals and Skagen. Riding is certainly a different way of experiencing Råbjerg Mile. Please note however that you may not ride on cycling paths.

There are many good opportunities for cycling round Råbjerg Mile. Bicycles can be hired from Råbjerg Mile camp site, enabling an easy way of seeing the area at the pace you prefer.